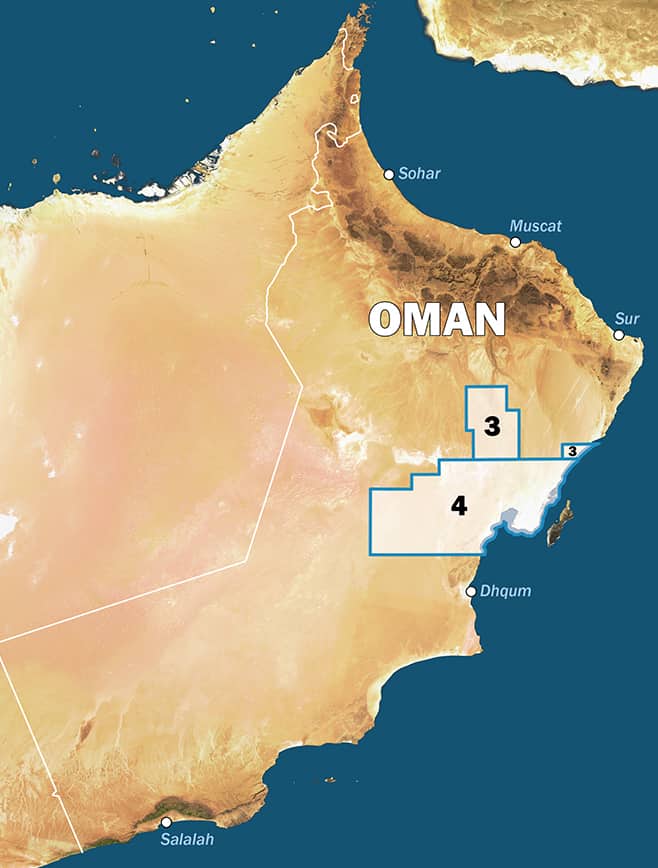 Ten years after the production was launched through an early production system, the Blocks continue to deliver. 2019 marks a new production record for the Blocks when 12,832 barrels of oil per day were produced. In the more than ten years since first oil on Blocks 3&4, Tethys Oil’s share of production has amounted to 35 million barrels before government take – and still the licence is valid until 2040 for exploration and production.

The drilling of the Farha South-3 well on Block 3 in early 2009 was the starting point for the successful exploration and development of Blocks 3&4. Through this well, the Farha South oil field was discovered, which has been the star performer on the blocks ever since.

The oil of the Farha South is not trapped in one large continuous reservoir. It is instead trapped in a large number of smaller, usually adjacent fault blocks. The main producing layer at the Farha South field is the Barik sandstone, at an average depth of 1,600 metres, but oil is also produced from the underlaying Lower Al Bashir layer. The low content of gas combined with the absence of a water drive in the Barik reservoir makes water injection necessary. Water is injected into the reservoir via injection wells in order to maintain the pressure and thereby stimulate production. About 30 fault blocks have been drilled and put in production, and the majority has been developed with water injection. The oil from the Barik reservoir is of high quality, more than 40 degrees API, and contains limited sulphur.

Shortly after the Farha South oil field was discovered, the SE-2 well resulted in the discovery of the Saiwan East oil field, the second commercial discovery on the blocks. At the Saiwan East oil field, the oil is produced from the Khufai carbonate at depths ranging from 1,700 to 2,400 metres. This reservoir was previously unknown as an oil producer in Oman. The oil from the Khufai layer holds a quality of approximately 32 degrees API.

The Shahd field was discovered in 2013 in a previously unexplored area on the blocks. In the Shahd oil field, oil is extracted from the Lower Buah and the Khufai carbonates at a depth of 2,000–2,400 metres.

The oil from the Shahd field holds a quality of 35–38 degrees API. Like the Farha South field, this area is also highly faulted and is not one large continuous reservoir. The oil is instead trapped in separate structures. Eight structures have been put into production. Water injection is also required on the Shahd oil field in order to reach good recovery rates.

After some years with focus on development activities aiming at increasing production, a number of exploration wells were drilled in 2017, which resulted in the discovery of the Ulfa, Samha and Erfan oil fields.

The Erfan oil field is a single structure producing from the Khufai carbonate formation, at depths ranging from 1,700 to 2,400 metres, in the same producing formation as in neighbouring Saiwan East field.

The Ulfa oil field is also a single structure. It is located on trend with the Farha South field. The majority of the production in the field comes from the Khufai carbonate formation, but also the Buah is on production. The Samha oil field is located adjacent to the Ulfa field and produces from both the Khufai and Buah formations. The oil from both Ulfa and Samha is of high quality, about 45 degrees API, and contains a high proportion of associated gas.

Full production facilities have been constructed both on the Farha South field and on Saiwan East field. At these facilities, reservoir fluids are processed in separators and heater treaters to remove water, gas and impurities in order to make the oil ready for export. The facilities also include large storage tanks, pumps and other necessary infrastructure, including field camps for the oil field workers.

In addition, Early Production Facilities (EPF) have been constructed on Shahd and on Ulfa fields. An EPF is a smaller production facility, which, to some extent relies on the infrastructure at the Saiwan East field to process the oil to be ready for export. The Ulfa EPF was finalised and commissioned late in 2018, providing the increase in production in 2019.

All production is transported through pipelines to the main exporting point at the Saiwan East facility. From Saiwan East, the oil is pumped through an 83 km long 16-inch pipeline to Alam Station just west of Blocks 3&4, for further transportation through the national pipeline system to the export port in Muscat, the Mina Al Fahal Terminal.