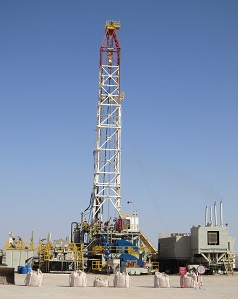 The only surefire way to determine that a prospect contains commercial quantities of hydrocarbons is through drilling. The first well on a prospect is called an exploration well and can also sometimes be referred to as a ‘wildcat’. The drilling operations are separated into several phases; planning and preparation, mobilizing, drilling, evaluating and demobilizing. A drilling programme is based on the geological prognosis which in turn is based on geophysical and geological data and expectations. The drilling programme describes how the operation will be executed. It clearly denotes a schedule along with technical details such as a casing and cementation programme and what type of drilling mud will be used. The drilling mud is used to cool and lubricate the drilling bit and also to provide hydrostatic pressure in the well to maintain wellbore stability. The mud also allows for the drilled cuttings to be removed from the borehole. Drilling is done both on land and out at sea. Drilling on land is a lot easier than drilling off shore, mainly due to the ease of logistics and the obvious difference in elements.

Indications of oil and gas whilst drilling

Whilst drilling the borehole is monitored by many means. Should hydrocarbons be encountered, the first indication of this will be in the drilling mud and in the drilled cuttings that are circulated up to the surface. When the drillbit cuts the hydrocarbon bearing rock oil and gas are liberated from the rock and is detected at the surface by the geologist. A gas chromatograph continuously monitors the mud for gases and is so accurate that it can trace molecular hydrocarbons in parts per million. The drilled cuttings will also show traces of oil when analyzed in the well site laboratory. Many times, oil is clearly visible in the rock without the use of a microscope. The telltale smell of oil is also often evidence that an oil zone has been penetrated. Another indication is the speed at which the drillbit drills the formation. Porous zones containing hydrocarbons often drill very fast.

When the drilling stops below the oil or gas bearing zone, the wellbore is electrically logged by a sonde that is lowered in the hole on an electric cable. The sonde measures the formation fluid type (oil, gas or water), the porosity and permeability of the formation. Some special tools can give a 3D picture of the formation type to better understand fluid movements in the reservoir. Once it has been determined that the reservoir contains hydrocarbons through logging, the only way to determine the productivity is to test the well by flowing it to the surface. If the analysis of the drilled rocks and the logging shows positive indications, a production test of the drilled hole is executed, whereby potential oil and natural gas zones are allowed to flow into the hole and up to the surface for measurement and analysis. Both the production rate and the amount of reserves can be calculated through logging and testing.