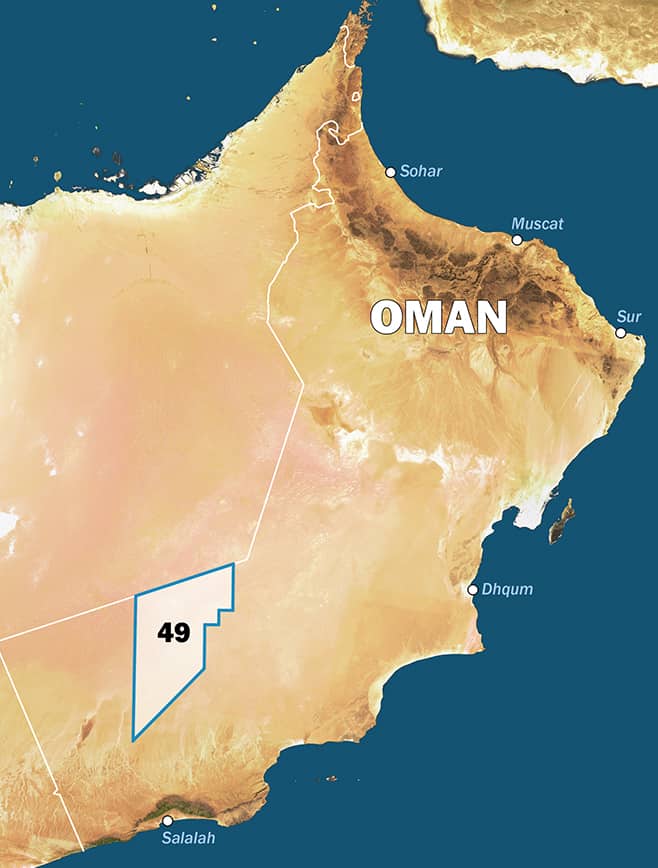 Tethys Oil’s second licence in Oman, Block 49, was awarded in 2017. After two years of seismic work, including reprocessing of older seismic data, and processing and interpretation of seismic data from a new campaign, Tethys Oil is ready to spud an exploration well in 2020.

The Block 49 licence covers an area of 15,439 km2. Nine wells have been drilled by previous operators within the block boundaries, several of which are reported to have encountered oil shows. Among the legacy wells, Dauka-1 was the first well ever drilled in Oman in 1955.

One of the first steps to be taken after the award of the licence, was the reprocessing of some 1,464 km of the over 11,000 km of 2D seismic data acquired by previous operators that had been made available to Tethys Oil. Through this reprocessing, a number of seismic anomalies were identified, which could be possible – primarily stratigraphic – oil traps. The anomalies have been identified within the deeper formations in the block at depths of 2,500 metres or below.

In 2018, Tethys Oil launched a seismic campaign on Block 49, whereby 253 km2 of 3D and 299 km of 2D seismic data was acquired in the north-eastern part of the licence area. The purpose of the seismic campaign was to further define possible oil traps and to enhance the understanding of the deeper parts of the block in general.

After processing and completion of the first phase of the seismic interpretation in second half of 2019, a drillable prospect was identified in the north eastern part of the Block. The prospect, known as Thameen (“Precious”) has been further delineated and the drilling of a well is being planned to a depth of close to 4,000 meters to evaluate three potential reservoir targets.