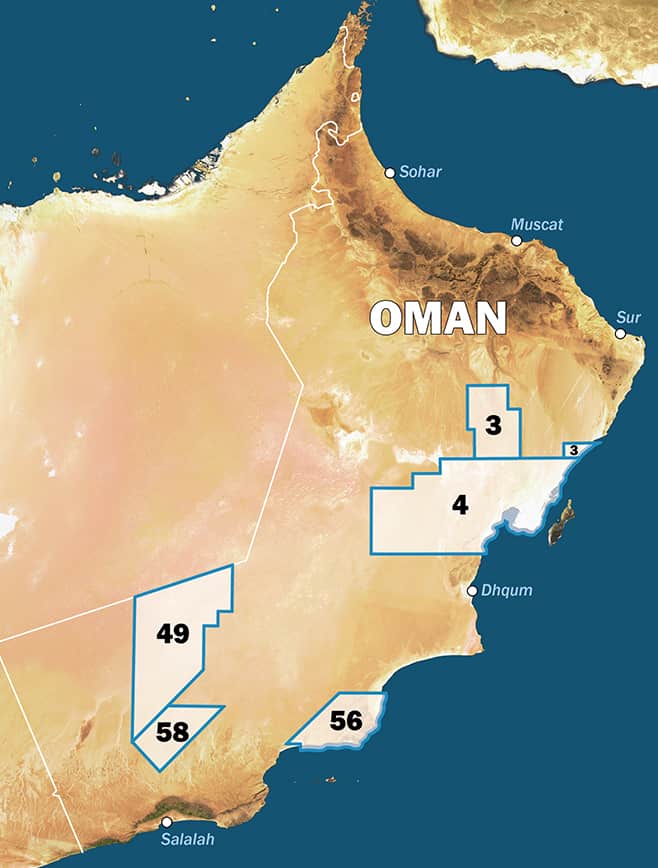 In this highly prospective country, Tethys Oil has its core area. With the desire and ambition to become a dedicated and successful player in the Omani oil and gas industry, Tethys Oil acquired interest in the licence for Blocks 3&4 in 2007. The blocks cover an area of 29,130 km2 in the central eastern part of Oman. Tethys Oil, through its wholly owned subsidiary Tethys Oil Block 3 & 4 Ltd, has a 30 percent interest in Blocks 3&4. Partners are Mitsui E&P Middle East B.V. with 20 percent and the operator CC Energy Development S.A.L. (Oman branch) holding the remaining 50 percent.

In 2017, Tethys Oil’s operations in Oman expanded when the exploration Block 49 was awarded to Tethys Oil as operator. Block 49 covers an area of 15,439 km2 in the south west part of Oman, bordering Saudi Arabia. Tethys Oil holds 100%* of Block 49.

Tethys Oil acquired in 2019 a 20 percent interest in the Exploration and Production license covering Block 56 onshore Oman. Block 56 covers an area of 5,808 km2 in the south-eastern part of Oman some 200 km south of Blocks 3&4.

In July 2020, Tethys Oil and the Sultanate of Oman entered into an Exploration and Production Sharing Agreement (EPSA) for Block 58 onshore Oman. The block is located in the southern part of the Sultanate adjacent to Tethys Oil’s operated exploration licence Block 49. Tethys Oil is the operator of the block and holds 100% license interest.

The combined area of Blocks 3&4, Block 49, Block 56 and Block 58 amounts to 55,000 km2, which makes Tethys Oil one of the largest concession holders in Oman in terms of acreage.

* Interest percentage reflects a change that occurred as EOG withdrew from Block 49. The withdrawal was announced in 2021 and Tethys Oil is currently in the formal process to receive final government approval to again have a 100 percent interest share in the Block.